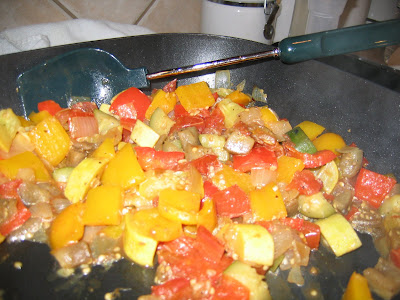 On Wednesday night Michael made Ratatouille. We love the movie, and so Michael decided he wanted to try the dish. I admit I was hesitant to try it, it had vegetables I had never had. But I was pleasantly surprised by how good it smelled while cooking it, and that it was pretty good. We ate it by itself, and warmed up some rolls. The next day since there was leftovers I cooked some rice, and served the leftovers over rice, and that was really good too. You may be wondering what is on Ratatouille. Michael found a few different recipes and took from several of them, so this is what we ended up putting in it: Roma tomatoes, zucchini, eggplant (that is the vegetable I had never had) yellow bell peppers, red bell peppers, onions, yellow squash, garlic, a bit is salt and pepper, and a little bit of balsamic vinaigrette. We chopped it in chunks instead of slices and then cooked it in the electric skillet. We will be making it again but with a few differences, less peppers, more zucchini, tomatoes and onions, and no eggplant (it was the seeds in the eggplant that weirded me out, it was good, but I could do without).

* had a request for the recipe, so here it goes. This is what we did:

Michael did the cooking part, I helped with the cutting, so I hope that I interpreted his notes right. But this does seem like a recipe that you can cater to your tastes, more or less of things etc...
written by jeannie at 1/30/2009 12:33:00 PM 3 comments:

Luke loves to "play" soccer with Michael. It's very fun to watch how excited he gets!

On a side note: This just happened while I was loading this video on....

I've mentioned before that Luke loves the bath. So when I heard Michael running the water in the master bath (the big bath) I undressed Luke and got him ready for the bath. We think it's to dang cute to see him then running all through the house to the bath just as fast as he can (yes, naked). But today he went running towards the other bathroom and I had to get his attention so he would run towards the big bath. Luke all of the sudden stops, puts his hand on his privates, looks at me and then bends down to touch the carpet. Right then and there I knew what he had done...he went pee on the carpet! But the part that I found amazing was that he knew what he had just done. 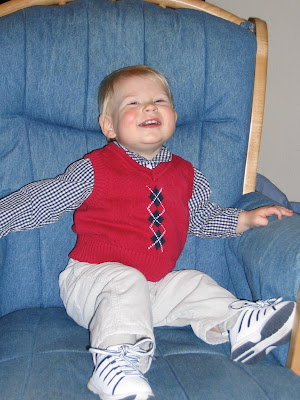 He has grown! He had his 15 month appointment today and he looks great!

He now weighs 22 lbs. he hasn't gained much, but I guess the more they walk/run the more calories they burn.

And he is now 33" tall! Wow, that seems really tall to me...I guess I can expect him to outgrow me by the time he's, what 10!
Picture taken yesterday before church, doesn't he look so handsome?!

A bath is a really good way to kill some time around here! Luke loves the bath. So when ever he is cranky or we have some extra time before nap or he gets messy self feeding or it's a bit to early for bed, he gets a bath! I think once I spent 45 minutes watching him in the tub! He doesn't like the getting out so much though! 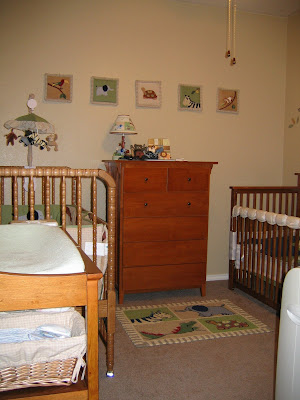 It's a tight squeeze...but it will work! Michael brought home a crib yesterday. As you can see I already assembled it and put the bedding in it. All it needs is a mattress. A co-worker of his had it in her attic and wasn't needing it anymore! Michael knows me so well that he even told his co-worker that I would have it set up that same night...I just had to get it done! This is the smallest of the 3 bedrooms that we have, but the other bedroom only has 2 walls, so we went for wall space over floor space.
written by jeannie at 1/16/2009 05:07:00 PM 1 comment: 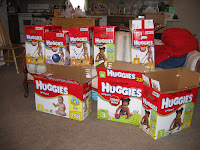 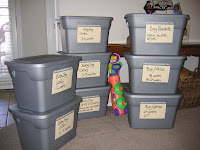 Which is fine by me! Since we won't be needing boy clothes for a while and don't want to get rid of them, I needed to find a better way of storing them. I am out of room in Luke's closet, and it's just him. So we are going to store the close elsewhere (garage) and then the closet will be better organized for Luke and Cassie. I didn't want to store clothes in boxes in the garage since the temperature varies so much, and there were openings in the boxes that would allow the close to get dirty. So I got containers, folded all of the clothes that we won't be needing, and labeled them so I know what is in them. I also put away the clothes that are too big for Luke now, but soon won't be to make room in the closet. While I was doing this it was also the perfect time to separate the little bit of clothes and blankets that we can use for Cassie. So out of 7 boxes of clothes and 1 box of blankets I will be able to reuse all of the onesies (newborn through 12 months +), and a few unisex outfits like the sleep and plays, the lap pads, hooded towels (so what if those are blue), and a few blankets when the cold weather comes. I was disappointed when looking through Luke's clothes because most of them are stained, he just spit up that much all of the time. I'm hoping the stains come out with something like oxyclean (which I didn't have then) and I will be sure to toss some in with all of Cassie's laundry. Sooo, the now newly organized boy clothes can go in the garage. Next on the to do list is organize the garage. I did start on it yesterday, made a little headway, but now it's too cold and I need Michael's help. And yes, that's a lot of diaper boxes, and those are the ones we kept!
written by jeannie at 1/14/2009 03:15:00 PM 3 comments:

Does anyone make tie shoes for toddlers?

Luke lost a shoe. We noticed the past couple of days that he loved to un-velcro his own shoes. On Friday when we were at The Home Depot I noticed that he had managed to take his shoe off. So I mentioned to Michael that we should periodically check to make sure that his shoes were on. How ironic that since I was the one to say that, the shoe went missing on my watch. So it is gone...somewhere in the Grapevine Mills Mall. And I only noticed it was gone on the way out of the last store we were in before we went home. I went back to the last store in hopes that maybe, just maybe I would get lucky enough to find it...nope. But it was a good thing we did go back because I found his doggie blanket. See, we were out longer than I thought we would have been, and he was past the point of being done... by 30 minutes, so everything I gave him he tossed out. I ca;;ed Michael and asked if he wanted me to retrace my steps and try and look for the shoe, thankfully he said no. So on the way home, I made one last stop to buy a new pair of shoes. I got him the same kind, just in case he looses another shoe (but with our luck he will, and then we will have two left shoes...isn't that the way it goes?) And then we were on our way home. For real this time! It really annoyed me that I had to get a new pair of shoes. I like to shop for him, but t replace things that are lost irritates me. To bad it wasn't lost closer to summer and then I could just get him sandals, or shoes with ties that would make it just a bit harder for Luke to get off! Oh well, vent over.
written by jeannie at 1/12/2009 11:24:00 AM 4 comments:

A few pictures from our trip 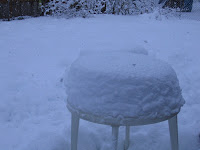 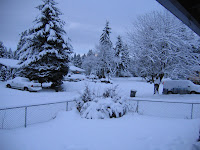 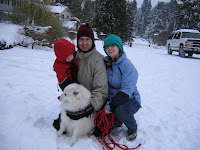 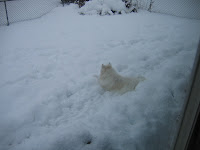 We got to WA. on Dec. 17 and the only snow there was what hadn't melted from the weekend before. It started snowing the night we got there and pretty much snowed all week. There was a lot of snow. And it was very cold. Ender loved the snow, Luke thought it was okay but we only played in it one day for about 15 minutes, and I was lucky enough that my coat was still able to zip up! We had a lot of fun. When we left 2 1/2 weeks later there was still a bunch of snow on the ground, but the roads were clear. It even snows a bit the morning we left.
written by jeannie at 1/09/2009 03:18:00 PM No comments: 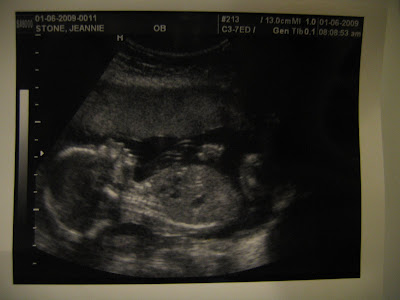 ...you all to Cassandra! No middle name here, kind of a tradition. No pictures of me yet, I'll have to have Michael take one on Sunday...hopefully this pregnancy with my head!

I have lots to blog about...

GIRL! (so the lack of evidence says)

Everything looks good and normal but I am having troubles with sciatica pain or whatever, hopefully it won't get worse, but if it does there may be physical therapy.

Now the other stuff. But I'll leave it brief, and post more details later. We are back from our 2 1/2 week vacation to the Seattle area. Lots of fun...lots of snow. Busy unpacking, doing laundry, getting the house put back together (again), and trying to get Luke back on a normal schedule...no small task, any of those!
written by jeannie at 1/06/2009 08:05:00 PM 2 comments:
Newer Posts Older Posts Home
Subscribe to: Posts (Atom)