Luke is just so proud of himself!

We discovered that Luke really liked playing with the wind chimes. At first he would just flick the chimes with his hand. It was just so cute to see his little hand move back and forth! Then he figured out that it was way more fun to grab onto them and yank to make the sound! We did that for a couple of days, and the day that we went outside and didn't go to the chimes, he remembered and would lean toward then, or reach his hands toward them! It was very cute! 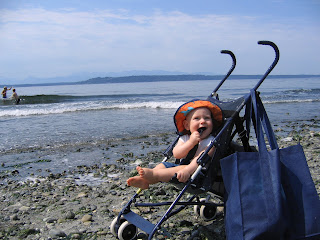 We went to the beach a Friday that we were in Washington. These are pictures from Edmonds beach. It was a really nice day, so we decided to take some lunch down there and see how the water was. 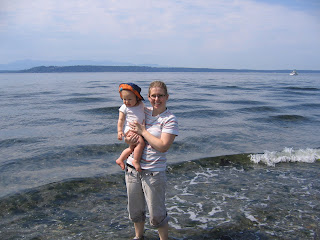 My dad had that day off so he went with us. This isn't Luke's first time at a beach, or in the water, but it was still fun anyhow! He really enjoyed the water, he even sat in it but we had to pick him up or have him stand when he kept trying to eat the rocks and the seaweed! 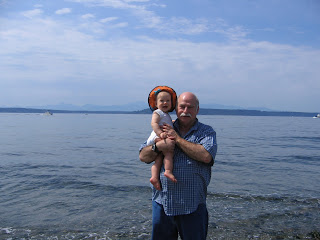 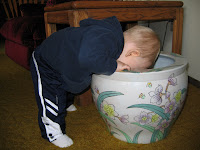 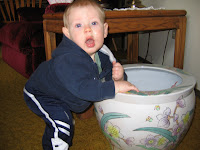 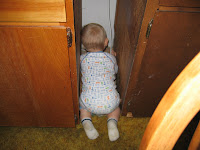 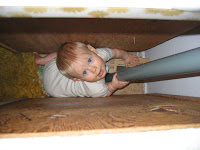 Random, but here they are...well, some of them. My mom has some plants on the house that we put in another room while we were there so Luke wouldn't kill them. We later had to put the big bowl in another room because we hadn't realized that he could reach the bottom, and it wouldn't have been a problem except there were rocks in the very bottom and then he reached in, grabbed a handful of rocks, and put them in his mouth! No surprise really, everything goes in the mouth. Luke also liked wedging himself in between the two cupboards. He never did figure out how to get out, someone had to rescue him every time he did that!

...I can't wait to try this from a new site that just found...Kiddio. I was blog hopping starting with sycamore stirrings to see what was for muffin tin Monday, and from there I followed it to the kiddio site. Then to a site called Tiny Morsels and found a post for some yummy looking Zucchini fries! We like zucchini and this looks really easy! And do you want to prepare your hot dogs for lunch in a fun way? This idea comes from the Make and Takes web site! I really have to update my places I like to visit links list...there are some really great ides out there!
written by Jeannie at 8/25/2008 08:27:00 AM No comments:

Now nothing is safe from Luke

Yesterday Luke learned to open the cupboards. I guess today we will be installing those lock thingies.
written by Jeannie at 8/23/2008 10:30:00 AM No comments:

Luke and I are back at home after our 3 week trip to the Seattle area. Even though we were gone only 3 weeks, it feels like I have 5 weeks of work to catch up on at the house! How is that even possible? It was great to see family and friends, and it was great to see Michael and Ender again. Our flight last night got in on time, even though when we came down to land, we had to go back up because there was a plane on the runway that had lost an engine and couldn't get off the runway fast enough. So the pilot made another go around and landed and taxied, but because of the rain and lightning, we had to stop 70 feet or yards (can't remember which one now) away from the gate. Once we finally got off, we had to wait for our luggage because they don't do luggage in bad weather...so we had to wait for that to pass. We got home after midnight. Luke hadn't slept much yesterday...he had less than 2 hours of a first nap, he napped for less than 30 minutes right before we had to leave for the airport, and he slept for less than 30 minutes on the first part of the flight....and then slept a little in the car on the way home. We put him down to sleep about 12:30 and I was afraid of what time we would wake up in the morning. I guess I had nothing to worry about because he slept until 10:45! Then he napped from 12:30-2:40, and is napping again since about 4 o'clock! He likes his sleep, so hopefully he will go to bed for the night no later than 8 o'clock! I guess we will see.

It is my last week here in the Seattle area. It was nice to come up here and cool off. Yesterday there was a record breaking high yesterday, the record was set back in 2002 (I think) and it was 87...I think yesterday the new high is that it got up to 85!

Luke is doing well. Since we have been gone he has gotten 4 new teeth and I can see the whites of 2 more, and now I know why he hasn't been sleeping through the night! He has figured out that is someone is playing with him and says "I'm gonna get you" that he needs to crawl away faster, and then he does, stops and looks back, and then goes even faster. It's very cute. Lune was in the highchair while we were making diner one night and we were cooking something on the stove and he noticed the steam...he had is eyes on that steam the whole time! Very interested in how that was happening. We went out to lunch the other day with a cousin of mine, and I gave Luke some of my pasta, he really enjoyed that!

I have just about done all of the things that I have wanted to do and I have seen most of the people that I wanted to see. There are some things that I want to do when Luke is older, but right now he is just at the age that he won't care if we go to the zoo, or Pike Place Market, or ride the ferries, or go camping. So when we come back sometime, we will do more. We are however going to go to the beach today, it is going to be another nice day and Granddad has the day off.
written by Jeannie at 8/15/2008 12:09:00 PM 3 comments:

Since we have been in Washington...

...it's warmed up a bit, the high yesterday was 85, warm to us I guess, hot to everyone that lives here! Luke is getting faster at furniture walking, he also has learned to walk behind one of those walker toys. I have a video clip that I will post when I get home. Luke has been teething up a storm, I now can feel three new teeth and I can see the whites of two more. (When he got his first two they didn't bother him, but with all these teeth coming out at once he hasn't been sleeping well, his nose is like a leaky faucet, and he gets super cranky if he is tired!) If I am holding Luke, he will reach out and want to go to other people. Luke has found that banging pots and pans is pretty fun...thanks largely in part to his cousin Mira who opened the cupboard! (he has not learned that one yet, but I guess soon!) Luke really enjoys being around other people, and his cousins make him laugh when they do silly things.

I still have thing to do while we are here in Washington. I would love to get down to the beach and take some pictures of Luke at the beach, maybe a ferry ride would be fun because when we come back in December it will be really cold and yucky. I thought about taking Luke on a little hike to some of the places we hiked when we were kids, but that's just not going to happen thins time. I also have to go to some of my favorite stores. It's a good thing I packed on the light side! I knew I would be bring stuff back, it seems like I always do!
written by jeannie at 8/07/2008 01:43:00 PM 2 comments:
Newer Posts Older Posts Home
Subscribe to: Posts (Atom)