My trip so far.

So far our trip has been pretty good. Luke didn't do as well on the flights as he has done before, he was still pretty good, but the big difference this time was that he really didn't sleep. He was asleep for the first take off but woke up within half an hour. And the second half of the trip, he slept less than an hour and a half. The flight attendants said that for a baby that has been on a plane for as long as he had, he was doing really good, so that made me feel better about the times that he was fussy! But over all he was pretty good. Luke has a little bit of a runny nose, and sneezes every now and then. It doesn't seem to be a cold right now, but maybe the sudden change in climate shocked his little system. It was raining yesterday when we got here so I'm glad that we dressed in our colder weather clothes, not that we have that much that fits him now because in TX it's just too hot, but I have put him in the next size of some of his clothes so he won't freeze. Don't get me wrong...I'm not complaining about the cold weather, but it feels colder than the 60 that it is right now. Just like in TX 104 feels much hotter than it really is. In between would be great! Because of the time change Luke was up at 4:30 am (felt like 6:30 to him!), but I think I can get him on track because he is taking his second nap right now and I can try for his third nap about 3pm and in bed between 6-7! It's almost 1 pm here and the temp is 60 out, but it might warm up because the sun is out!
written by Jeannie at 7/30/2008 02:23:00 PM 2 comments:

Leaving on a jet plane...

...tomorrow Luke and I will be on our way to the Seattle area for 3 weeks. I have a brother that is being sent to Iraq and we wanted to see him before he leaves, and have some extra family time. Michael won't be able to come with us this time, the vacation he does have he is going to use that for our Seattle trip in December, and Ender is not coming because it's too hot for him to fly, but he will come with us in December. I will get to see my parents, all of my brothers, sister in laws, and nieces and nephews. I will even get to see some of Michael's family while we are there. I hope to see some friends, and eat at some of our favorite spots! It will be nice to escape the heat, I'm just not use the triple digit numbers, maybe I'll even see some rain! I am going to try and make some posts while I am there, but we will see if that actually happens!
written by Jeannie at 7/28/2008 08:21:00 AM 1 comment:

Luke had his check up this morning and is doing great! He weighs 19 lbs. and is 28 inches long. I never remember percentiles, but his Dr. said that he is normal, tall and skinny, and perfect! He certainly however doesn't feel like he is 19 lbs., he feels more like 25 lbs.! I am glad that I got the car seat that goes to 30 lbs. and 32 inches because he won't grow out of it, and then we can just get the forward facing seat when he turns 1!
written by Jeannie at 7/25/2008 11:40:00 AM 1 comment: 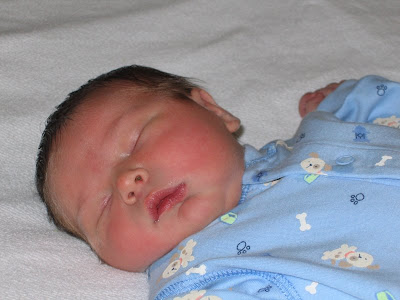 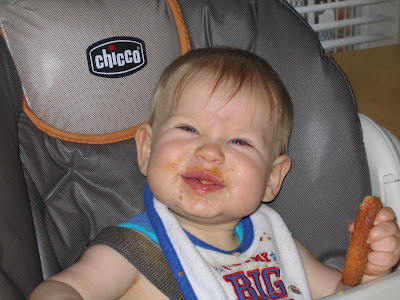 We have really enjoyed the past 9 months. I didn't think that it would go by as fast as it did, and yet at the same time at first it seemed like some parts of it took forever. Like trying to get Luke to sleep, to nap, to go longer in between feedings, and to get on a schedule. He has changed so much in the last 9 months, that it will be fun to see how much more he changes in the coming days, months, and years! And it will seem that in the blink of an eye, we will be celebrating his 1st birthday!
written by Jeannie at 7/24/2008 08:52:00 AM 4 comments:

...was the day Michael was getting home after being gone for two weeks. I decided that I wanted to surprise him with something, but at first I wasn't sure what. Then one day as I was reading someones blog (can't remember what blog) I came across this recipe for Amish White Bread and it sounded so easy that I thought I would try it! You had to do it in steps because of the yeast and the rising and stuff, but that worked out perfect because I was able to do the bread while Luke was taking his nap. 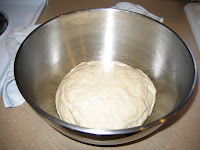 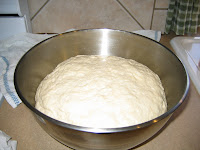 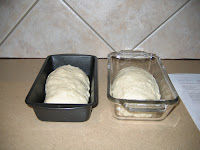 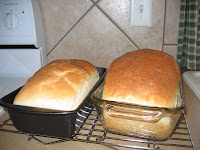 Doesn't that look yummy?! I wanted to have it cooking in the oven and close to being done when Michael got home so he could come home to a yummy smelling house, but I got confused and thought that he was coming home later than he did...so we had the bread smell ready for the time I first thought. It was still a surprise, we just had to wait! 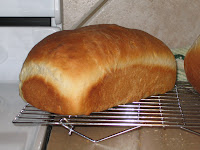 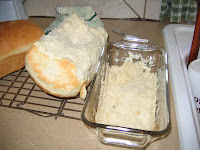 I was really surprised at how easy this was to make. And it tastes so good! But I guess that I needed to grease one of my pans even more than I did because the bottom of the bread stuck to the pan, so we ate that one first! These are only a few pictures, I didn't take pictures for every step of the process!
written by Jeannie at 7/22/2008 10:11:00 AM 2 comments:

What we had for dinner the other week. 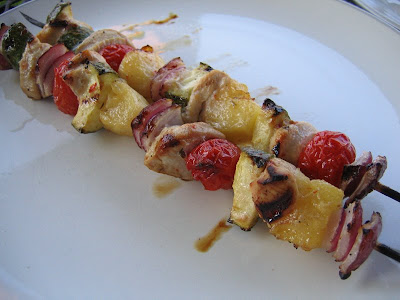 Don't they look yummy! I made 6 of them, 3 for each of us, and I also grilled some asparagus that I marinated in the same flavor as the kabobs, but I don't have a picture of those because we ate them, and I didn't think to take a picture until after most of the food was already gone!
written by Jeannie at 7/19/2008 02:22:00 PM 4 comments:

What a cute idea!

I was blog hopping today and I found this cute idea! They call it muffin-tin meals or muffin-tin Monday! Doesn't that look fun! Kind of gets you out of the rut of doing the same thing for lunch day in and day out. And what a fun way to introduce new foods! I can't wait until Luke is old enough and I can do this. There are a bunch of people who do this and if you follow the links at the bottom of this post you can see what kinds of things they put in their muffin-tins!
written by Jeannie at 7/17/2008 06:35:00 PM 1 comment:

...Luke and I were playing on the floor together. After he used me to stand up....HE LET GO!!! And stayed up for a couple of seconds before putting his hand back on me. He did that twice today! I had to stop playing with him, set up the video camera and hope that he did it again. And he did! I even thought I saw what looked like a little furniture walking when he was trying to get to the other end of the toy basket, and another time when he wanted something on the couch and he would shuffle over to try and get it! My baby is growing up tooo fast!
written by Jeannie at 7/17/2008 05:39:00 PM 1 comment:

7 years ago I married my best friend! Happy anniversary Michael! As I look back over the years at first it seems like the trials, hard times, moving and very bad luck out weigh the good...but then I remember all the laughter, joy, smiles, and good times that we had/ are having together! Sorry no pictures, Michael has the laptop with him in Atlanta! Yup, that's right, we don't even get to spend our anniversary together, this isn't the first time (our 5th anniversary Michael was out of town) and I'm sure it won't be the last! We celebrated last month, so were good! Looking forward to seeing where the next 7 years will take us! I love you Michael!
written by Jeannie at 7/14/2008 01:03:00 PM 3 comments:

We think it's just toooo cute when Luke is in the car or his crib making these happy little noises! A few minutes after I filmed this he did finally go to sleep! 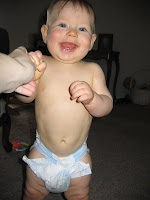 This is what I found one day when I went to get Luke up from his nap. It was really hot that day, and even though we have A/C (we keep it set at 78) it seemed much warmer inside the house. I decided to just let him nap in his diaper. I know... rookie mistake, never leave a kid alone in just a diaper! I'm guessing part of the diaper was rubbing on the sheet, or he was pulling at it, maybe both! He sure does look happy, doesn't he?!
written by Jeannie at 7/03/2008 05:39:00 PM 3 comments:

Take me out to the ball game... 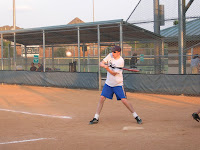 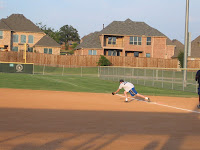 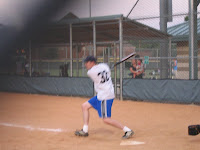 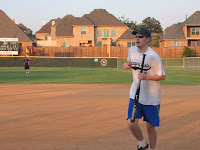 Last night was baseball night! There were plenty of guys on the team that showed up to play, but that wasn't enough to win...unfortunately. I can't remember what the score was at the end when the mercy rule was called into play, but they did great! The weather was a bit cooler and that was nice. There were several of the families that came to watch! There is a great playground right behind where the guys play to keep the kids busy!

Michael is right handed. If you notice in the pictures he is batting left handed. Last night I asked him why. His answer...he's closer to first base! He started batting left handed in middle school, and that's the way it has been ever since.
written by Jeannie at 7/01/2008 09:12:00 AM 1 comment:
Newer Posts Older Posts Home
Subscribe to: Posts (Atom)