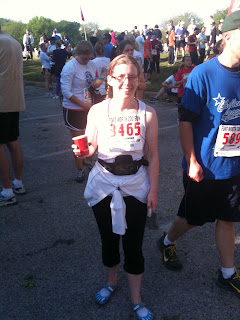 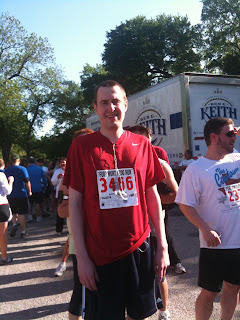 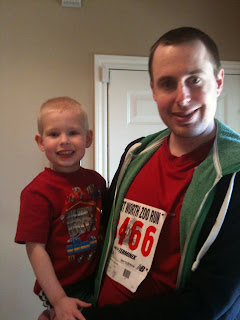 Michael and I ran our first 5k together! We had set a goal last year to do it, and slowly worked toward that goal. I think we can both say that we did better than we hoped to- Michael finished in under 30 minutes, and I finished in under 40 minutes. Almost never in my life have I run and further than 2 miles at a time and I've only run 2 miles a handful of times. We liked it- at least I did! It felt really good to set a goal, work to achieve that goal, and even though we weren't as ready as we could have been (sickness and travel the couple of weeks before felt like it set us back) we did it anyhow! We want to do the zoo run next year too! I like to run, but I don't see myself going crazy on the running- I enjoy it- but I'm not sure I'd enjoy hours of it!
written by jeannie at 4/30/2011 09:43:00 AM No comments:

Pictures from our trip 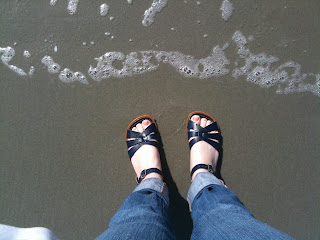 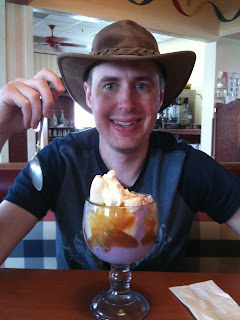 I couldn't take a lot of pictures because my camera broke- just died, but these are a couple I took with my phone. My feet in the Atlantic ocean! And Michael eating his Jim Dandy from Friendly's! It had been over 16 years since Michael went to a Friendly's so he was thrilled when he found one in Myrtle Beach SC.

It was a very quick trip- one we hadn't planned on making, and we wished we could have been there under a different set of circumstances, but we were glad we went and had a good time. We found out last Friday that my 90 year old grandpa was in the hospital and wasn't expected to make it through the night. We found out Saturday afternoon that he had passed on that afternoon. We were able to leave the kids with Michael's parents and attend the funeral and then head down to Myrtle Beach with my parents and all 6 of my dad's brothers and sisters. It had been about 22 years since they were all together- last time was at my grandmas funeral, so it was nice to have everyone there to get to know. 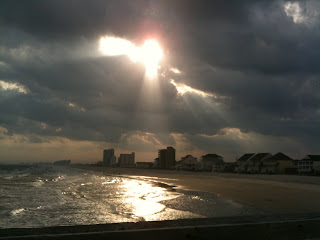 We've been having a great time in North and South Carolina. Sad we had to go and say good bye to Grandpa Stewart, but were blessed we got to go and spend time with aunts and uncles.
written by jeannie at 4/09/2011 01:19:00 PM No comments:
Newer Posts Older Posts Home
Subscribe to: Posts (Atom)